Continuing my occasional foray into the guitar in literature, here is a famous picture of the author of “Ulysses” and “Finnegan’s Wake” presumably trying out a tune before a session (or maybe about to smash the guitar in frustration). In fact, Joyce was reputed to have had a fine tenor voice, and the singer John McCormack offered to teach him, encouraging him to take music as a career.

The original photo, taken by Ottocaro Weiss ,a friend who was “scandalized” by Joyce’s guitar playing, is housed in Cornell’s James Joyce collection, in an exhibit in a glass closet titled “Poetry and Music.” 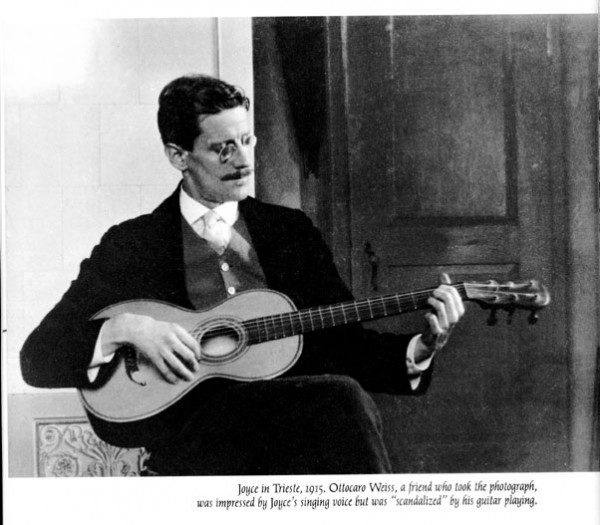 “Fingers to stray on Joyce’s guitar again after its restoration,” an article by Terence Killeen in the March 22, 2012 Irish Times, discusses the restoration of Joyce’s guitar and contains a fascinating video clip of the luthier at work on the guitar. Gary Southwell, the luthier, guesses, based on the finger wear on the fretboard, that Joyce probably was not a “fantastic” guitarist because the wear suggests mostly first position, standard chord forms: “He wasn’t all over the fingerboard.”
However his right hand also needs attention.

Here is an interesting article on the picture (warning: may contain graphic details of chord shapes).

And here are some photos of a session with Bernard O’Donoghue, Oxford poet, who bears an uncanny resemblance to Joyce.

Restoration of the guitar